You are here: Home > Curriculum vitae of PEN

Born in 1941 in Durup, Salling in the north-western part of Jylland.
My parents had a dry-goods store for about 50 years.
Is number two of six bothers and sisters. Student from upper secondary school in Nykøbing Mors.
Educted medical doctor from the University of Copenhagen 1959-1967.

Specialist in internal medicine and cardiology ( heart and circulatory diseases ). Gold medal from the University of Aarhus in 1965 ( issue : Heart diseases in diabetic patients ).
1976 defence of thesis ( issue : Direct and indirect measurements of blood pressure in obese subjects and patients with peripheral arterial diseases).
Chief physician 1984-2003 Frederikssund Hospital and 2004-2005 Roskilde Hospital. Specialist practice in internal medicine and cardiology in Copenhagen 1977 – 2011.

Chairman 1987-2001 in the Council of Tobacco-related diseases established by the Ministry of Health. Knight Cross of the Order of the Dannebrog in 1997. Pensionist since 2011. 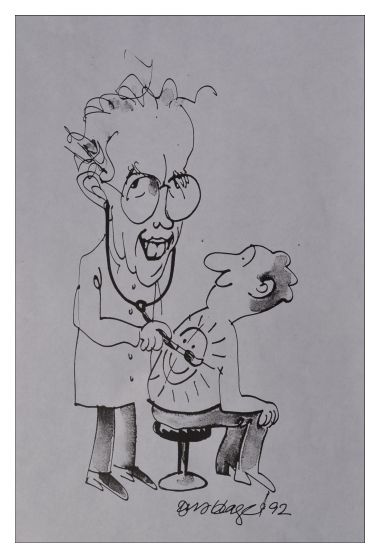 In the world of art I am autodidact. Began in the upper high school to make sketches with pencils and paint pictures with oil colours. Later also using watercolours, crayons, and acrylic colours. Have during the last twenty years also worked with sculptures, glass mosaics and enamel on cupper. Sculptures have been worked out in tree, soapstones and moler. Several of them later casted in bronze.

Have arranged or joined several exibitions in galleries, workplaces, and official and private institutions (  part 12 : Exibitions ).

The caricature on this side showing doctor Pen painting with a stetoscope is made by Jens Hage before my first exibition in 1992 to a danish newspaper ( Berlingske Tidende ).