You are here: Home > Enamals on Cupper 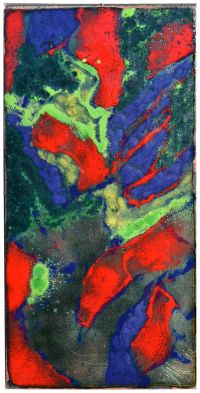 Enamel works have been produced for several thousand years. The glass powder is available in several hundred nuances.
The powder is either sprinkled or painted on the copper plates. This plates are placed in a 800-900 degrees warm own, and after few minutes the glass powder are melted on the plates. Then taken out of the own and pressed during cooling. New colours of glass powder can be placed on the plates followed by a new delay in the own.
It should be mentioned, that two danish masters have produced exiting and admirable works in enamel on copper : Bodil Eje and Giorgio Musoni. Bodil Eje produced wounderfull works often using green and blue colour nuances. Giorgio Musoni worked out a special technique, where etching of part of the copper plates were done before the glass powder was placed on the plates before burning.
Several of these wounderfull works, often in quite big formate, had motives from Venice, where Musoni was born.
I inherited about one hundred different glass powders from Bodil Ejes family, and have during the last 5-6 years tried to work also in this field. A difficult, but exiting field and technique has it been.